OTBN (Open That Bottle Night) 2015 – wine galore and kosher Beef Bourguignon, what a party it was!

This past weekend was the 16th anniversary of OTBN (Open That Bottle Night), and what a party we had. I originally posted that we would get to the nine bottles of wine, well we did but not those nine! Benyo brought over a bottle of the famous 2003 Syrah and a friend brought over a bottle of his own concoction, and so the Ella Valley and Katrzin will have to wait for another week.

Kiddish was made over my friend’s Quail Hill Cabernet Franc, which was super smooth and fruity. After that we had some awesome whole wheat Challah, that my wife makes, and then on to some very nice olive and bean soup. The soup never ceases to amaze me, I love how the kalamata olives dominate the flavor profile, while the beans add the heft and body to the dish, really fun.

Wine wise, things started off with a bang! The 2006 RSR was my last bottle – but this wine has another two to three years left in the tank easily! WOW! What a great wine that is. The layers are rich, dense, almost fleshy with rich mineral and earth – truly extraordinary! The 07 Yatir Shiraz was nice, but it really showed its colors the next day. The Netofa Latour red, was insane, a lovely black and blue wine – so old world in style that it was shocking that it was made in Israel.

At this point we brought out the Beef Bourguignon, which if you follow the official recipe is not very kosher at all 🙂 Now, to be fair, the original video of the recipe did not call for bacon at all, instead she browned the meat in olive oil, in the video above. Still, the book has the bacon and so it has become the “law”. Since, our Jewish law does not allow for either bacon or the butter (no milk and meat), I was stuck with modifying the recipe to my liking. Instead of bacon I used Meal-mart Beef Fry and instead of butter and flour to thicken, I used chicken fat and flour. In the end, it was definitely not the fat free or healthy diet food of the 20th century, but we did serve a lot of wine with it – so if the 60 minutes episode about the French Paradox has any truth, we will all be alive to write about it! END_OF_DOCUMENT_TOKEN_TO_BE_REPLACED

This past weekend friends from the kosher wine forum were coming over for the Sabbath and it was time to do my long-awaited blind tasting of the only 6 wines from California’s 2009 Syrah vintage (there may be another out there but it is not yet available). I wanted it to be blind, as all our favorites were in this one and I wanted all the table to vote without any prejudices.

Another friend from the shul brought two wines from Italy of which his brother is the kosher supervisor. We had the first one for kiddush and the second one later on, more on those in a minute. Finally, we my last  – which was awesome!

For the fun we threw in another non- Cali Syrah (really an SMV) from Dalton – pre Shabbos meals, which was lovely – but not up to the caliber of the top wines we had later that evening.

Food wise, same old same old – which is great to me! We started the meal with some lovely Herb encrusted gefilte fish and then moved on to some sausage stew. For dessert, ER or HK made a crazy good blueberry topped crisp – which was served alongside some non-dairy vanilla ice cream.  All in all a great meal, made better by the friends that were there – and of course by the lovely wines we had to enjoy with them all. 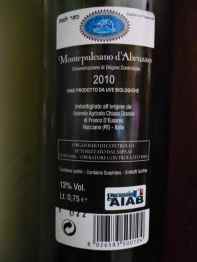 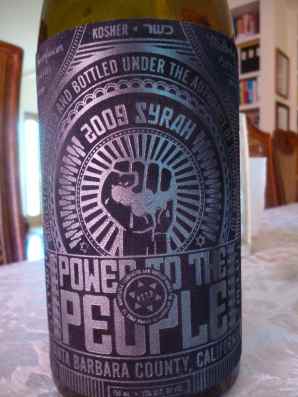 To start the evening we enjoyed a nice bottle of Dalton Alma, a lovely wine though not as complex as the rest of the big wines we had that night. Blue and lovely – a very nice wine. END_OF_DOCUMENT_TOKEN_TO_BE_REPLACED

After having a quiet set of days at my friend’s homes and at our house, without any guests, it was time to open the wine spigots and see what we could get going. It has been too long since we enjoyed some Shirah Wines – wines from the now famous Weiss Brothers. The winery is in Southern California, but the wines are now very easy to buy, as they are being sold in NY and Chicago, (distributed by River Wines – thanks Ami!!) The wines are also online at Kosherwine.com (where you can get some of the now sold-out 2010 Coalition), Gotham Wines, and SkyViewWine.com.

It almost seemed like Shirah Wine became famous after my original post about the Weiss brothers (all I did was give them their due and rightful respect – their wine did the rest!). They are two wine hell bent (in the right way) brothers who went out on a ledge, and almost went over it, to make great kosher wine and spirits! Throughout all the crazy tribulations they continued and believed in themselves, a truly rare and awesome trait – if I say so myself.  You have to have a very strong internal compass and self-belief to build a wine when all seems to be going against you. I really do have great respect for the two of them, but that does not bias my feelings about their wines – they just happen to make damn good wines!

The first time we tasted their wines, was indeed at the now famous Benyamin Cantz (Benyo of Four Gates Winery) and Rabbi Naftali Citron Shabbaton, where they shared with us the just bottled 1-2 punch and Syraph. Since then we re-tasted the 2008 Syraph again along with the 2009 Power to the People and it was truly a joy tasting them side by side the much heralded and hot Israeli Ortal Syrah from Yarden, which to me felt underwhelming in comparison!

The Weiss brothers, is not just a saying or moniker, they are actually brothers! They consist of Shimon Weiss (the hands and crazy good palate of the pair) and Gabriel Weiss (newly married with a family) is the winemaker. However, they really are the “brothers”, nothing gets done without the two of them. I recently visited the Agua Dolce Winery, where the Shirah Winery is currently stationed, on the way home from the 2013 IFWF, and Shimon was going to Israel in the next few days. To get ready for his departure, they had to get everything bottled and ready to go for the Passover sales. Why? Because the bottling line, labeling, and the entire complex minutia that goes into bottling a wine after the wine is made, was being handled by Shimon at that time. That included bottling the new 2011 Coalition and the new 2010 Single V. Thompson, Syrah/Mourvedre, both of which I tasted and blogged about at the 2013 Jewish Week City Winery tasting.

It all started in 2004 when Gabriel moved from the east coast to the other side of the country to work for Herzog Winery. He worked as a cellar rat (person who moves around wine, cleans out barrels and tanks, etc.) there for almost a year before the opportunity to make wine almost literally fell into his lap! The 2005 season was a bumper crop and in November, the vineyard, from where they sourced the grapes, still had grapes on the vines! The vineyard owner told Gabe to come on by and harvest all the Syrah grapes he wanted – free of charge! So, in 2005 Gabe made the first ever Shirah wine, a wine label that would go dormant for three years, but not forgotten! The wine was made with a bunch of friends in a garage! Now that is what I call Garagiste wine! END_OF_DOCUMENT_TOKEN_TO_BE_REPLACED

This past week I finally got the chance to put together the kosher Syrah tasting that I have been craving. I have been stockpiling Syrah for some time and now we finally had the chance to try them all at the same time. I have been at all of the kosher California wineries; Herzog Cellars, Four Gates Winery, Agua Dulce Winery, Shirah Winery, Covenant Winery and the Brobdingnagian Winery, and I have caught the bug of cool weather Syrah. This is not a myth; this is a real change in the manner of which the Syrah expresses itself.

The Syrah tasting consisted of a bunch of kosher California Syrah, along with one from Australia and Israel in the following order. The 2009 Harkham Aziza Shiraz, Preservative Free (not tasting as great as when I had it in Sydney), 2009 Shirah Power to the People, 2003 Four Gates Syrah, 2008 Syraph Syrah/Grenache, 2007 Brobdingnagian Syrah, and the 2004 Yarden Ortal Syrah. The first five are cool weather Syrah, while the Yarden Ortal is an

example of hot weather Syrah. The 2007 Brobdingnagian was Jonathan Hajdu’s inaugural release and since than he has gone on to become the associate winemaker at Covenant Winery, while also making more of his Brob wine. The 2008 Syraph was essentially the first release by the Weiss Brothers, though they did make a smaller batch of wine in 2005 as well. The story of Jonathan and the Weiss brothers can be found in a lovely written article by Gamliel Kronemer here.

In cool weather climates, the Syrah grape is very happy to show expressions of smoked meat, black pepper, tobacco, and leather around their core of blue-black fruit. They also have nice acidity, which helps to brighten the mouth and balance out the wine’s palate. The clear note here is that the grape expresses blueberry and watermelon in ways that will astound you. The bright sweet blueberry along with rich black fruit make for a wine that is unique and truly flavorful. The blue fruit may not always appear at first, but a trademark of the cooler climates, in Australian and California, was that they all exhibited rich blueberry fruit intertwined with some lovely black and sometimes watermelon along with spice. In warm climate regions, characteristic Syrah flavors tend toward dark fruits, cherry, white pepper and earthy notes, though leather and tar are sure to also make a guest appearance.