Open That Bottle Night 15 and a few missed wine posts 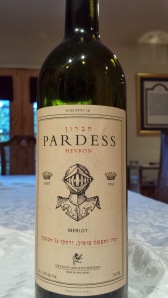 Well, it is that time of year again for OTBN (Open That Bottle Night), a night conceived by Dorothy J. Gaiter and John Brecher, in February 2000, then with the WSJ. Well, officially it is the last Saturday night in February, which this year is Feb 22. However, us Jews like Friday/Sabbath to be our special wine moment, so we will be enjoying OTBN this Friday Night, hopefully!

According to the WSJ site: On OTBN, which is celebrated on the last Saturday of February every year, thousands of bottles all over the world are released from prison and enjoyed. With them come memories of great vacations, long-lost loved ones and bittersweet moments. The whole point of the weekly “Tastings” column is that wine is more than the liquid in the bottle. It’s about history, geography, relationships and all of the things that are really important in life.

We have had many great OTBN tastings but this year, it is about tasting my oldest and best Yarden Winery wines. Yarden Winery has moved to the sweet side on their new wines, for the most part, but the El Rom wines have never been sweet. Yarden has always been on the sweeter side, in terms of ripe fruit, but these past few years, the weather has really hurt them badly. The 2009, 2010, and 2011 vintages have been nice wines, but too sweet for my tastes. The 2012 and 2013 look like they will be better, from what we have tasted of the white wines. Still, the El Rom and red Katzrin wine have always been controlled and beautiful. They are Yarden’s flagship wines and they keep a very tight lid on the fruit in these wines. The 2006 and 2007 ROM wine is another story, it was always sweet and somewhat controlled, and yes, very expensive. It all started when the late Daniel Rogov gave the 2006 ROM, a very unique Israeli blend wine, a massive 96 score!  That score sent the futures of that wines to the moon, along with the expectations of greatness. In reality, it is a nice wine, but nowhere where Rogov placed it.

Well, I have been sitting on too many of these wines, and so this week, for my version of the OTBN 15 (the 15th year of OTBN), I will be opening the 2001 Yarden El Rom (Shmita year), the 2004 Yarden El Rom, and the 2007 Yarden ROM. I have many backups in the ready! END_OF_DOCUMENT_TOKEN_TO_BE_REPLACED

For years I have always sported a purple colored beaming grin when I finish my tasting at the IFWF (International Food and Wine Festival) in LA, which hid my grumbling stomach’s discontent. Like I have documented for years, I never get to eat at the events, even as the entire food court mocks me, attempting to pull me into their warm, delicious, and very present embrace, with their wafting and intoxicating aromas. Still, I stand strong and I taste through the night until my teeth are purple and my stomach is close to rioting on the lack of food. Truth be told, I am not that good at taking notes when eating – the flavors of the food cover up and belie the flavors and aromas of the glass that beckons me closer with its “come hither” look and aromas. So every year, after the event I go to dinner at Jeff’s Sausage (down the street from the new location of the IFWF). Which is sheer madness of course, here I have half the Pavilion at the Hyatt Regency Century Plaza, filled with food from one of the best kosher restaurants in the world – Tierra Sur Restaurant, and I pass on that for the spicy and homely fare of Jeff’s Sausage. In no way is this a slight to the joy of Jeff Rohatiner’s cookery and food. Rather, it has been my conscious tradeoff, throughout my many year experience at IFWF to drink through as much of the world-class wine I can before my taste-buds shutdown, rather than give them to the food court, no matter how wonderful it is.

This year was a massive shift for me, gone was the purple grin and my mutinous stomach, as I visited and added the New York KFWE to my travel dates. To say the KFWE was different than the IFWF would be an extreme understatement, the IFWF has close to 1000 people at the show, while the KFWE has closer to 2000 people. Further the event hall at Pier 60 is some 2 to 3 times larger than the Pavilion tent at the Hyatt Regency. Also, there were many options for lunch and dinner from the myriad of NY restaurants that all share half the hall, all clamoring to share their wonderful fare with great fanfare. The Pier 60 overlooks the Marina and Harbor and many folks were outside braving the cold to grab a smoke, but at least they had some comfort of looking at the marina and its waterfront.

To really appreciate the event you had to come to it with a game plan, and there were many guests who had a few of their own. The event started at Noon for those in the trade, a new thing that the KFWE started last year and something that the IFWF has been doing from the start (though initially with a smaller trade time). The trade event was crowded but there could not have been more than a thousand folks there, so access to wine was not a problem in any way. The event hall can easily handle 1000 people, it is a bit more complicated when the number swells to two thousand people, but still there was no pushing or shoving going on even at the end of the public tasting, when the number of guests was at its maximum. But I digress; the trade tasting allowed me to focus solely on wine and the winemakers, which was great. END_OF_DOCUMENT_TOKEN_TO_BE_REPLACED

This past weekend I enjoyed some lovely wines from Israel and California. The first wine is the 2010 Covenant Sauvignon Blanc and the second was the 2009 Adir Cabernet Sauvignon, Ben Zimra. The third wine was the 2010 Gvaot Pinot Noir that I loved and tasted at the Kosher Wine Society Tasting – New Wines and Vintage Experience, and the fourth wine which I also tasted at the KWS tasting was the 2007 Hevron Heights Merlot, Pardess.

The only wine in this lineup that disappointing me was the 2009 Adir Cabernet! I had the chance to taste this wine in Israel last year, and when I tasted it now it showed itself in a vastly different manner. Where before the wine was rich and layered, now the wine was still green but felt unbalanced and not all there. Again, it could be an issue of transportation or storage, but I bought the wine at a great store – called Liquors Galore. It has a fantastic selection and the prices are solid for wines that are on sale. For all other wines, shop and compare, but their selection is very impressive, and it is local if you live in Flatbush, NY.

Again, I believe the issue here is transportation and maybe the wine is a funk or quiet period, but in the end, it is a wine I could not recommend to others. The other wine I bought there was the 2010 Covenant Sauvignon Blanc, which was awesome and bright, ripe and clean, while showing nice minerality, slate, and crispness. END_OF_DOCUMENT_TOKEN_TO_BE_REPLACED