Well, I am one post in and I have another 5 to go. As I stated in the first of my 6 posts on my trip to wine tastings in London, Paris, NYC, and L.A., I am truly thankful that my trips ended well for everyone, the news keeps getting uglier.

As I stated the kosher wine tasting season was upon us, and the first of my posts about the ones I attended was my London post. After a quick train ride to Paris, and a stop at the hotel, it was time for another tasting, the Bokobsa Sieva tasting. 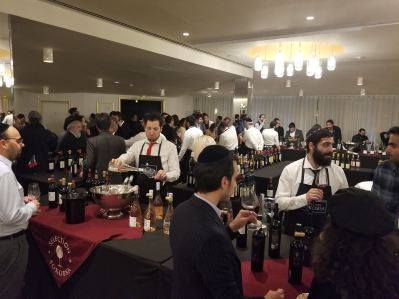 The Bokobsa Tasting, is presented by the company known in France as Sieva, and it happened in Paris (well not exactly Paris, more on the very outskirts of Paris to be exact) on Tuesday, on the stunning grounds of the Pavillon des Princes in the 16th district. I arrived early and after taking a bunch of pictures I just relaxed and waited for the event to start. One of the issues from the tasting in past years was the older vintages of wines poured, along with the food that was cold and quite simple. This year, the food was nicer, they had warm food, and some very well put together dishes. Sadly, the vintages on the Royal wines were still strange, some new 2017 vintages while some wines were 2014 and 2015. However, the Bokobsa wines were all the latest, other than the 2018 Chablis which was not being poured. 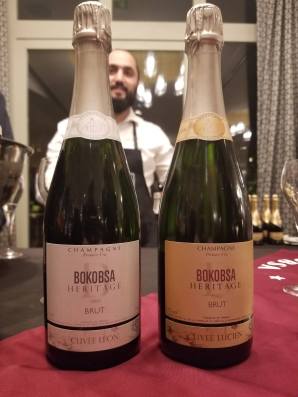 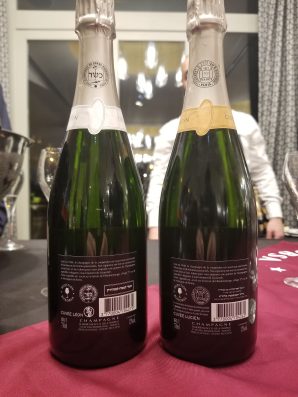 One of the biggest shocks I had at the event was the realization that France is in a far worse place, in regards to kosher supervision than Israel and the USA. I have seen many times, where Badatz Edah HaChareidis and the OU would both be on the same bottle of wine, like Or Haganuz wines and others. However, in France, that seemingly is not an option! Understand that there are NOT multiple mashgichim (kosher supervisors) when there are multiple supervisions on a single bottle. Rather, the ONE/Two mashgichim all do the stringencies of one or both of the kosher supervisions. However, in France, this cannot work – I am not kidding! Clarisse showed me two bottles of the same Champagne made by Bokobsa Sieva. The difference between them, was not the overall supervision, as that was one the same, nor was it in any way a different vintage or winery, nope! They were EXACTLY the same wine – EXACTLY! The only difference was the name of the supervision on the back of the bottle! One had the kosher supervision of Paris Beit Din and the other had the kosher supervision of Rabbi Rottenberg.

So, I then asked the head of the supervising Rabbis, who was at the tasting, if the Paris Beit Din accepted to be on the same label with Rabbi Rottenberg, would Rabbi Rottenberg agree? He said no! OMG! I was speechless. ME! What question would you followup to that answer? I asked why? He said because they have different requirements. I said they are the same Mashgichim, so why would you care? In the end, he said that is how it is in France. Sadly, that is the state of affairs and I moved on.

Another fascinating difference between the labels is that the Paris Beit Din version of the wine has a different Cuvee name than the Rabbi Rottenberg version. That, I was told, was just for marketing, so that people would not be as shocked as I am now! Finally, there is also a pregnant lady with a slash through it, denoting that alcohol and pregnancy is not a good idea, the normal disclaimer wines have on their labels. On the Rabbi Rottenberg label, it was all in text, no images of a lady. END_OF_DOCUMENT_TOKEN_TO_BE_REPLACED

So, let’s start from the beginning. As I posted here, about the coming wine events of 2019, there were many options for you to get out and taste great wines almost across the globe. Well, recently, as you know well I have been focusing more on Europe, so I was in Paris later last year again to taste the new 2016 Bordeaux, and now I wanted to return to Bokobsa’s tasting, which is not officially part of the KFWE franchise. Avi Davidowitz, of kosher wine unfiltered, did every KFWE this year, Tel Aviv on the 4th of February, London on the 6th of February, and then on to NYC and L.A. I decided that I did not need to go to Sommelier this year and instead just focused on Bokobsa’s tasting which was on the same day as the KFWE Tel Aviv in Israel.

As I return home, Paris and London KFWE, NYC KFWE, and L.A.’s KFWE are in the rearview mirror. I will be posting on them separately, so I start with Bokobsa Paris.

To start the Bokobsa Tasting, from the company known in France as Sieva, happened in Paris (well not exactly Paris, more on the very outskirts of Paris to be exact) on Monday, Feb 4th, on the stunning grounds of the Pavillon des Princes in the 16th district. I arrived early and after taking a bunch of pictures I just relaxed and waited for the event to start. One of the issues from the tasting in past years was the wine glasses, but this year, Bokobsa had lovely glasses to truly appreciate the wines.

The ambiance and space were both far improved from the previous location, which was the basement of the Intercontinental Hotel in Paris. The table layout was far improved, it was truly a lovely event. The food was a bit mediocre, with it being essentially cold food, like Sushi and elegant salads on crackers, though they had warm chicken further along into the event.

The wines and the setting were the clear stars of the event, and with the lovely glasses, the wines did shine. My main issue with that some of the wines were the old and not showing well, which degrades the very purpose of a show/tasting like this. For example, they poured a 2013 Covenant Sauvignon Blanc and a myriad of older roses that were far over the hill and not showing well. Though at the same time, they poured some lovely Covenant Cabernet Sauvignon and Lavan, along with many of the top Royal Wines from France and Spain, and the new Champagne from Rothschild. There were a few older vintages of the French Royal wines that I do not remember now that were out of place, but they were still showing well. END_OF_DOCUMENT_TOKEN_TO_BE_REPLACED