When I last left off on the story of my trip to France, I had just ended an epic tasting of the new 2017 wines from Royal Wines. I then jumped on a train, and I was once again joined by Avi Davidowitz from the Kosher Wine Unfiltered blog, and we made our way to Strasbourg for a tasting of Alsace wines and other wines that are not made by Royal. It included some new 2016, 2017, and 2018 wines, but once again it mostly involved French wines from the 2014 and 2015 vintage.

2018 French wines to the rescue

Now, I need to get on my soapbox for two major topics, the first is how AWESOME the 2018 vintage is showing right now. At this tasting and again with Yoni Taieb of Taieb Wines, the 2018 vintage shows itself incredibly well wit the simple entry-level wines of Bordeaux. It takes them from tinny and boring wines to rich and well-balanced wines, that sell for 8 euros or less! This is something that we will never get in the USA! Sadly, the only wine that comes close to this is the 2018 Chateau Les Riganes, Bordeaux and maybe the 2018 Chateau Genlaire, Bordeaux Superieur, but I think this wine will be above the 10 dollar price of the Chateau Les Riganes.

On the trip to France, two things came up often, when I was speaking French with the natives, something I was not able to do as much with Avi around, as Avi still needs to learn French! One, and this really shocked me, was how common French folk think California is dangerous when I would tell them where I am from, because of all the media of the horrific shootings we have had in our state. Besides that, the Jews I spoke to, especially the ones who drink kosher wine, complain bitterly about the cost of French wines! The more I look at this issue the more it makes me wonder, why are the wines so expensive? Yes, there is a cost for kosher supervision, but that cost does not explain the double or triple pricing of the non-kosher cost. That question is even more exaggerated in France, where there is no three-legged-stool in regards to wine distribution. Yes, France has Negociants, but for the lower level wines that is a practice that is going the way of the dodo bird.

The truth is that what is needed are reasonably priced wines. Avi Davidowitz, on his Kosher Wine Unfiltered blog scores wines partially based upon price. I do not agree for many reasons, which we discussed over our trip, but it does NOT diminish the overarching issue which is 100% true, kosher wine prices have gotten 100% OUT OF CONTROL. Sorry, this is insane and before someone tells me it is the Chateau’s fault for having such high En Primeur pricing, the kosher wine prices are shockingly higher. This really needs to be rebooted, IMHO, but sadly, it will stay the same until we get into a serious crunch or glut, whichever occurs first. Yes, we are blessed with some QPR wines, and I always post about them, but overall, the grand cru wines are getting out of control.

That is why I am so happy with the 2018 simple wines from Bordeaux. Sadly they will not come to the USA under those prices, but for those in France, there are serious options.

Last year, I wrote that this post was coming, but I had to taste the 2015 and 2016 Pape Clement first before I could make my feelings clear. At this point, I have tasted the 2015 Magrez reds 5 times and the 2016 whites 2 times. I am 100% comfortable with saying they have all taken a seriously far step backward from the epic 2014 vintage. The 2014 Magrez were world-class wines and wines I have bought happily. However, I can not say the same for any of the 2015 or 2016 kosher Magrez wines I have tasted to date. I was very disappointed when I tasted the kosher 2015 Pape Clement, and I was shocked by the results of the 2015 Tour Carnet, Fombrouge, and others. The 2016 Pape Clement is better than the 2015 vintage, but it is not worth the bottle it is in. The whites have all also lost a few serious steps from the 2014 vintage. Personally, I will not be buying any of the 2015 or 2016 Magrez wines I tasted, other than the Pape Clement wines I tasted that I bought En Primeur.

I miss Weingut Von Hovel and the Gefen-Hashalom wines

Two years ago Nathan Grandjean and I made a run for Von Hovel, and I wanted to do that again year after year, and maybe even Nik Weis. Sadly, they told me there were no new wines for 2017 or 2018, and now I just heard there was none made in 2019 either. I am really so sad, those wineries have so much potential, but I guess Gefen Hashalom (“Vine of Peace”) felt they had too much inventory already. I am really not sure what they have that is not sold? All the Nik Weis wines are sold, from what I know, Gary got the rest of the 2016 wines. Von Hovel did not make any wines after the 2015 vintage, and they have nothing left either. I really hope they make wines in 2020.

After last year’s solid tasting with Nathan Grandjean, I had tasted all of the 2015 French wines that I know of. The 2016/2017/2018 wines are slowly being released, from producers other than Royal. Kosher Wine International, the producers for all the Magrez wines, has now fully released the 2015 wines. Two days after this tasting we would be tasting Taieb wines, but we wanted to taste the 2017 Domaine Lescure Pommard, so that was on the list.

After last year’s tasting of a few Magrez 2015 wines and my other tastings of them at two wine events, I wanted the chance to taste them YET AGAIN, with both of the Pape Clement and the new 2016 Clos Haut-Peyraguey, Sauternes. So, I had Nathan get all the 2015 and 2016 Magrez wines that are available and we tasted them over two days. Thankfully, we also had a couple of wonderful wines and some duds.

Finally, we tasted all of Nathan Grandjean’s Les Vins de Vienne wines from both the 2017 vintage and the 2018 whites. He had some tank samples of the 2018 reds, but honestly, they were not ready for me to write proper notes on. END_OF_DOCUMENT_TOKEN_TO_BE_REPLACED

When I last left off on the story of my trip to Israel and Europe, I had just ended with a classic run for the border to Weingut Von Hovel. After we returned from visiting Von Hovel we had a wine tasting. It included some new 2016 wines but it mostly involved French wines from the 2014 vintage and earlier.

I had not been able to taste the Smith Haut Lafitte or the 2014 Chateau La Tour Blanche, 1er Cru Classe, until this tasting and they were not a letdown in any manner. WOW, they were worth the trip and worth stocking up where and if possible.

If you are interested in these wines, they are mostly wines that are here or will be here eventually. If you cannot find them or do not want to wait – email Nathan Grandjean about how to get them: Contact@yavine.fr (I DO NOT work for wine stores, never have and never will. I get no kickback or payment for this). I state this here only as information. It also seems that kosherwine.com will soon have the 2014 Chateau La Tour Blanche, 1er Cru Classe as well.

We continued tasting these wines for more than a day, it was only after a long time that the great 2014 wines really opened up. Also, we tasted the Von Hovels throughout this time as well (I did not post the scores here again, as they are in their own post).

The rest of the wines at the tasting were either horrible, passable, or nice enough. My many thanks to JK, Nathan, and his family (for putting up with us). The wine notes follow below – the explanation of my “scores” can be found here: 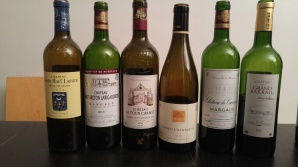 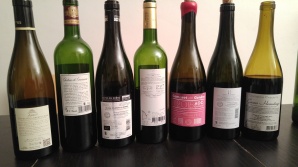 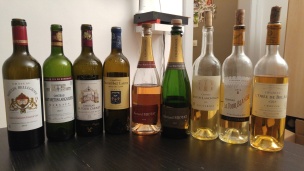 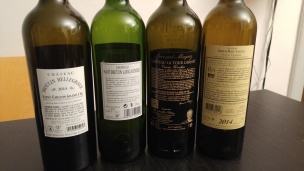 2016 LI BI Rose, Cotes du Rhone – Score: 88
The wine is a rose made of 80% Grenache and 20% Syrah. Lovely nose of grapefruit, floral notes, with green apple, gooseberry, with nectarines, and good mineral. The mouth is nice enough, the acid is medium in nature, and while it is well balanced it is unidimensional, with good lemon, peach, and nice acid that does rise after a bit. The finish is long and floral with good saline, mineral, slate, and good spice. Drink up!

2016 Le Mourre de L’isle, White – Score: 87
The wine is a blend of 40% Roussanne, 30 Viognier, and 30% Grenache Blanc. Lovely nose of peach, and honeysuckle, floral notes, with green apple, and spice. The mouth is slow to open, with peach notes, good acid, and balance, with again little complexity but nice acid, with peach, grapefruit, and crazy floral notes. The finish is long with mineral and sweet spices, cinnamon, and cloves. Drink by 2018.
END_OF_DOCUMENT_TOKEN_TO_BE_REPLACED