← The 2014 Private International Food and Wine Festival is coming back again to Herzog Cellars in August!
Catching up on some wines from past weeks →

This past weekend saw us enjoying a lovely round of Cabernet Franc wines and our patented Herb encrusted gefilte fish loaf, which was followed by sausage stew. What can I say, I have a true soft spot for GREAT Cabernet Franc, and thankfully there are a few VERY good options. When I think of Cabernet Franc, top on my list is Four Gates Winery followed by Ella Valley Winery. After that, there is Hagafen Winery, Carmel Winery, Psagot Winery, and the new comer is Teperberg Winery’s 2011 Cabernet Franc – that is off the charts!

Many have spoken about the demise of Merlot and the rise of Pinot Noir from what is now called the “Sideways Effect.” Miles (the movie’s protagonist) proclaims his hatred for Merlot and his love affair for Pinot Noir, in the movie Sideways.  While this has been confirmed by many trusted sources, what has been glossed over is the hammer blow that Miles delivered to Cabernet Franc.  In the very same movie, Miles is poured a glass of Cabernet Franc, he smells it, sips it, and ceremoniously pours out the glass into the spit bucket, while dropping an anvil on all Cab Franc fans, as he states “”I’ve learned never to expect greatness from a cab franc, and this is no exception”.  “Ouch!” This is the exact kind of snobbery and lack of appreciation for the varietal’s unique qualities, mentioned earlier, that has kept the masses away from Cabernet Franc. In the end of the movie, we find Miles drinking his vaulted and prized bottle of 1962 Cheval Blanc, which is composed of 66% Cab Franc, 33% Merlot, and 1% Malbec!  We do hope that the irony is not lost on you, as it was certainly not lost on the producers!

Ask a winery why they do not sell Cabernet Franc, and they will start by disparaging it as a blending grape, and then add that it is not a noble variety.  What’s so funny is that the vaulted Cabernet Sauvignon – the archetype noble grape, is actually a cross between Cabernet Franc and Sauvignon Blanc – go figure! You see, perception (and a lack of marketing) is reality, and while many have complained that Cabernet Franc is a thin and green flavored wine, that has more to do with the vintner’s and vineyard manager’s incompetence than it has to do with the grape.  Cab Franc needs a fair amount of heat to bring it to its true potential, but too much heat, and it gets toasted.  Poor viticulture is the grape’s Achilles Heel.  Still, the wine’s olfactory charm and bright fruity composition makes it a clear contrast from today’s fat and fruit forward wines.  Sure, you find wineries styling the poor Cabernet Franc grape into a Cabernet Sauvignon by suffocating it in oak and tannins.  However, the wine’s true beauty lies in its clean lines, bright red fruit, and it’s crazy floral/fruity nose, that may be accompanied by some bell pepper, which causes many a wine critic to turn up their noses to this wonderful wine.

Even further is that many a winery, including one from the tasting will say that they would rather have a Cabernet Franc that lacks green notes than one that shows it. Why? Because truly Cabernet Franc started as a grape grown in France, and in a region that does not get very warm, namely Bordeaux and the Loire Valley. Napa and Israel, on the other hand, do get warm, and some in Napa would like their wines to taste along the lines of their preferences, namely less green notes. Green notes normally arise from the lack of ripeness, think of vegetal notes you sometimes taste in fruit when the fruit is less than ripe. As the fruit ripeness, the Pyrazines within the grapes are killed off by the sunlight and ripe flavors appear. I love green notes in Cabernet Franc and am not turned off by them, in my opinion of course.

That said, Hagafen works hard to get the green out of the Cabernet Franc, saying the green is seen as a flaw and they work hard to make sure it does not appear in the wine. Sure, many wineries feel the same way, but Franc is green – it is the definition of the grape – but this is the new century and I guess it is time to evolve the Franc ideal, but in my books it is wrong.

The interesting fact is that Ella Valley is really the hot bed for all things kosher and Franc and I was happy to showcase two very different styles of the wine from the same winery. The 2006 Vintage is all fruit and green, while the 2009 vintage is all about the tannin and spice and fruit, with the fruit taking a back stage presence. That will change as the wine evolves and the tannin and mineral recede to show the fruit, but for now the two wines could not be more different – which is why it is so IMPORTANT to age Franc!

If you are interested in getting into the Franc scene, the best options now are:

Well, here are the wines we had, the crowd was meant to be larger, and I was supposed to get to a Psagot and a Gush, but such is life. The Four gates Francs were not meant to be on the menu – we had them last year, at our previous Franc horizontal. The wine notes follow below: 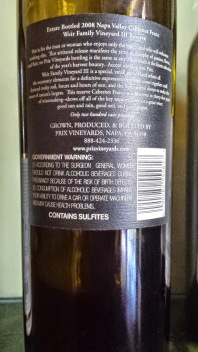 2013 Lueria Rosé – Score: A-
To me this is one of the better kosher Rose out there, and for sure in Israel, along with the Netofa Rose also from 2013.

This wine was not made using the classic Rose method of saignee (AKA bleed) – but rather is a true fruit rose made of Cabernet, Merlot, and Barbera, not your classic Rose blend in any way! The nose on this light salmon colored wine is rich with dirt, mineral, floral notes, rose hips, peach, kiwi, and strawberry. The mouth on this medium bodied wine attacks with good bitterness, sweet and tart fruit, more earth and grass, and dried quince, candied pineapple, Pamela, litchi, dark cherry, ripe nectarine, and spice. The finish is long and spiced with spiced red apple, good bitterness, bracing and balancing acid, cloves, nutmeg, and citrus pith that lingers long with nice fruit – BRAVO!

2006 Ella Valley Cabernet Franc – Score: A- (and more)
WOW I still love this wine – it rocks and it embraces the green of Cabernet Franc, which is something I love! I just checked my notes from 2009, more than 4 years ago and sure enough this wine has changed little! Yes the wine is starting to show its age, but not with any flaws as much as showing leather and green attributes more than oxidation or real age. The wine is still there but is in drink NOW stages.

This wine is a blend of 95% Cabernet Franc and 5% Merlot. The nose on this garnet colored wine is still far more earthy than fruity, still hopping with loamy dirt, raspberry, plum, and bell pepper. The mouth on this medium to full bodied starts with an attack of now nicely integrated tannins (that still pack a punch), but follows with a full mouth red fruit, raspberry, cassis, black cherry, and plum that are so concentrated and layered it takes your breath away, along with sweet cedar, mineral, and graphite. The finish is green and long with spicy oak, tobacco, vanilla, cloves, rich leather, along with more forest floor dirt, crazy mouth coating tannin that lingers long, and red fruit. WOW this is a wine that should be in drink now mode, but I would say you have at least another two years. That said, it is at its peak or very close and will be there till 2016. BRAVO!!!!

The nose on this wine explodes with dark brooding fruit, rich oak influence, and rich loamy dirt. The mouth on this full bodied wine is rich, layered, concentrated, and still brooding, with ripe and tart blackberry, raspberry, cherry, all wrapped in a cocoon of sweet cedar and mouth coating tannin that are slowly integrating. The finish is long and smoky with rich tobacco, rich sweet chocolate, layers of tart fruit, along with lingering tobacco, tannin, mineral, graphite, and soft leather. BRAVO!!

2009 Ella Valley Cabernet Franc – Score: A-
This wine is a blend of 85% Cabernet Franc and 15% Merlot and that 15% does add dark fruit to the wine. This wine as well needs tons of air, open a few hours – or better decant.

The nose is rich and layered with clear green notes, crushed herb, hints of blueberry (that blow off over time), dark cherry, along with asparagus, insane loamy and rich dirt, and spicy oak. The mouth on this medium plus bodied wine is rich and layered with nice pencil shaving, rich mouth coating tannin, nice mineral, along with saline notes, blackberry, black plum, raspberry, and spicy oak. The finish is long with even more pencil shavings, coffee, massive rising tannins, dirt, licorice, slight orange pith, along with mounds of tobacco, smoke, vanilla. BRAVO!!!!

2009 Tanya Cabernet Franc Reserve Halel – Score: B+ to A-
The nose on this dark garnet colored wine exudes a rich and expressive nose with raspberry, crushed herbs, rich floral notes, now only hints of green notes, charred oak, and plum. The mouth is rich and medium to full bodied still with more crazy mouth drying tannin that have yet to fully integrate, rich charred oak, tart red ripe fruit, a truly full shot of floral notes, blackcurrant, and hints of bell pepper in the background. The finish is long with charred oak, espresso, hints crushed herbs rise on the finish with a hint of chocolate cherry, and vanilla.

← The 2014 Private International Food and Wine Festival is coming back again to Herzog Cellars in August!
Catching up on some wines from past weeks →