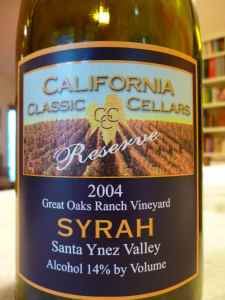 I first wrote about the California Classic Cellars wines, back during Passover, in this post. What I know of the story (if there is one) has not changed, if anything it is now further shrouded in mystery. I wrote about them because I got two bottles of the very good 2005 California Classic Cellars Cab/Syrah blend. However, it was not until I went down to LA and went to Glatt Mart on Pico that I realized there is a MUCH larger story here.

So, I left it where I found it – nowhere. These wines are creations of Sammy Perez, or as he writes on the bottle, Samuel Perez. Samuel also made the Kiddush Hashem Syrah back in 2001, 2002, 2003, and 2004. I emailed him asking to get more about his story, but so far no reply. If anyone knows how to get hold of him – please tell me, I really liked the wine and would love to hear more about the entire story of Kiddush Hashem Winery and California Classic Cellars. The wine had the same stylistic approach to wine making as the 2003 and 2004 Kiddush Hashem, almost a fingerprint if would – quite interesting. Lots of toast, chewy yet finessed, along with great blue and black fruit, fighting back and forth – between the Cabernet and Syrah fruit, for who can take over full autonomy. In the end, the blue fruit won, but not before integrating a large basket of black fruit with it – quite impressive.

Another fascinating aspect of this story – is that he seemed to have two “wineries” going in 2004. He had the 2004 Kiddush Hashem Syrah and the 2004 California Classic Cellars Syrah, Reserve, and maybe others wine from 2004. Why have tow of the same wine with different labels? The 2004 Kiddush Hashem wine was made from grapes in the Santa Barbara wine region, and the 2004 CCC Syrah Reserve was made from Santa Ynez grapes, which is a sub-appellation of the Santa Barbara wine region. So, why a new label and why a new story – more mystery.

According to VOS Selection, it started in 2001. Dozen of years in kosher wine production and consulting led Rabbi Samuel Perez to create Kiddush Hashem Cellars in 2001. He has surpassed his own goal of creating a fine wine that is not only kosher and unpasteurized but is also a leading contender among ultra premium wines from the Central Coast. Using biodynamically farmed Syrah grapes from the Shiraz clone in the Santa Ynez Valley appellation, Kiddush Hashem wines are made in a traditional and minimal manner, unfiltered and unfined. The quality of the product, the classic Rhone style and pure expression of the fruit have made an impression on many in the California market. Wolfgang Puck of Spago said, “This is the best Kosher Syrah I have ever tasted.” Whether you seek a wine that is kosher or not, the Kiddush Hashem Syrah is truly impressive, opulent and sophisticated.

Why he left Kiddush Hashem and moved to CCC – I do not know. A few years ago the 2003 and 2004 Kiddush Hashem Syrah went on sale for 10 bucks a bottle – 2 case minimum. At that time, the wine was OK, but again, as I have said previously – they were hit and miss. Some bottles rocked and some were a total miss. Obviously, if the story of Spago is true, he tasted a good bottle.

To be fair, when the Kiddush Hashem wines were released, in 2005, there were few good kosher Syrah out there. There was the REALLY good Herzog Syrah, Reserve in 2004 and 2005, but the came out in 2006. There was Hagafen‘s Syrah – pre Prix, and yes there were Yarden Syrah and others from Israel, but not many were well known in those days – some 8 to 10 years ago! We take Israel for granted now, but 8 years ago – that was not the case, unless you lived in New York. Even then, most people were stocking up on French, Herzog, and Hagafen – unless you were a real Israeli wine groupie.

All my friends laugh at me – with my serious infatuation with all things CCC and Kiddush Hashem. I know there is a clear story here, I just cannot find the person that is free of biases, to help me close out the story. I know many people who seem to know about him, but they are all keeping coy, because of reasons that I cannot and will not discuss on this medium. So, I leave it to all of you – if you have a way to close this story please do contact me.

Before I left Glatt Mart, I bought the Cab and Syrah and they turned out cookable to OK. The clear winner of the CCC, is the 50/50 blend of Cabernet Sauvignon and Syrah.

So, without any further delay – the next two wine notes from the CCC and my best wishes to you all. These wines were enjoyed last weekend:

2005 California Classic Cellars Cabernet Sauvignon – Score: B (or less)
This wine is way too hot and way too overripe, but I had to taste it. The nose does show notes of overripe blackberry, raspberry, and plum, along with some mineral. The mouth is packed with still searing tannin and good acidity, but really not much else, other than alcohol and herb. The finish is long and spicy with too much heat to really take in anything of substance. It is selling now for 6 bucks, which is not bad for good cooking wine.

2004 California Classic Cellars Syrah, Reserve – Score: B++
The nose on this near black colored wine is throwing crazy sediment – so be careful. The nose starts off with lovely blackberry, and controlled forest berry fruit, with clear floral notes, along with sweet herb with Oregano. The mouth on this full bodied wine is missing bright black fruit, what is there instead, is crazy mouth coating tannin, solid structure, very nice spice, along with a hint of blue fruit, and nice cedar. The finish is long with more spice, cinnamon, cloves, pepper, allspice, lavender, and tar.