← A wine lover in a land of sobriety – what is a oenophile to do?
2005 Ella Valley Cabernet Sauvignon, Vineyard’s Choice and Lamb and Dates Meatballs →

In a large Dutch oven heat the oil till it starts to shimmer and then add in the diced onions and leeks and saute them until browned. Lower to a simmer and add in the Portobello mushrooms and sweat them till they release their liquid. Then throw in the potatoes and coat them with the onions, leeks, and mushrooms and let braise until the potatoes are halfway softened. At this point the pot should be a quarter filled with vegetable liquid. Throw in all the spices and herb along with salt and pepper. Then throw in the sausage and let it them cook for half an hour. Finally, throw the Brussels sprouts into the pot and let them cook for 15 or so minutes, or until they soften – but not to the point where they become too soft – it is a fine line.

I totally understand that some find Brussels sprouts to be as evil as I find Cilantro (though to me Cilantro is the devil’s spawn). So, if you do not like Brussels sprouts – replace them with Okra or Cubed Squash. For a starch we used quinoa and paired it with a fresh green salad.

I recently posted about my trip to Chicago and the fact that I got sick on my trip, the outcome of that was that I brought a bunch of the unused bottles home. One of them was a bottle I saw at Sommelier, last year, in Tel Aviv Israel, from a winery called Har Bracha. The wines are sourced from the famous Har Gerizim – the mountain of blessing during the time of Joshua – where the blessings were extolled upon Har Gerizim and the curses upon Har Eival. Hence the name Har Bracha (Mount of Blessing) for the winery as Har Bracha/Gerizim is where the vineyards are located.

The sub-label is called Highlander – yeah – not a great name – nor a name that translates well here in the US. Still, Highlander is a loose translation of Man of the Mountain – Ish Harim, which is what the winemaker and the winery are meant to symbolize. All of these label shenanigans smacks of a bit too much frippery for me, but the contents do not share these foibles. Instead, it reminds me of a solid Israeli Cabernet, showing Mediterranean qualities, all the while controlling the overripe and over oak issues that plague many an Israeli Cabernet – solid work indeed! The price is the only thing keeping this from attaining the QPR award.

The wine note follows below: 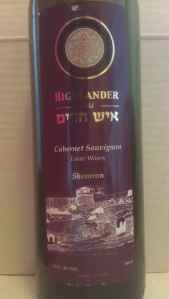 I must admit that this wine grew on me, to start I thought it was another typical over-ripened Israeli Cabernet Sauvignon. What I realized as I let this wine open was that it was indeed a lovely wine – once it had its chance to shine. The wine is a blend of 85% Cabernet Sauvignon, 10 % Merlot and 5% Petit Verdot. The wine essentially had three stages; at first the wine showed classical Cabernet Israeli notes of butterscotch, cassis, blackberry, and cedar. As the wine continues to open it shows herb, eucalyptus, blackcurrant, and raspberry, with a far too strong presence of overripe fruit, raisin, and date. With a bit more air the wine opens to its peak version, the nose is opulent with blackberry, black plum, cassis, licorice, lots of graphite, with a hint of herb. The mouth is medium full, rich, and coating with soft integrating tannin, layers of raspberry, black fruit, black cherry, sweet cedar, and lovely tart fruit. The finish is long and spicy with chocolate, tobacco, vanilla, and cloves closing out the finish. The best part to me was the long and lingering finish of sweet cedar, ripe blackberry, leafy tobacco, graphite, and plum.

This is a lovely wine that to me is best enjoyed by opening the bottle pouring a glass and then letting the bottle air for at least an hour or two. After that it should be free of the overripe fruit and hit its stride. This is a wine that should be there at its peak in 6 months and a wine that is not long for cellaring after that point – drink before the start of 2016.

← A wine lover in a land of sobriety – what is a oenophile to do?
2005 Ella Valley Cabernet Sauvignon, Vineyard’s Choice and Lamb and Dates Meatballs →