On October 20th of this year (2011), for Shemini Atzeret lunch, we crashed at our friend’s party, as we did not put up a sukkah, and one needs to eat in a sukkah (without a blessing) on Shemini Atzeret. Anyway, the meal was truly fantastic, but Benyo (from Four Gates Winery), my wife and I, were invited to taste a vertical tasting of Herzog Napa Valley Cabernet Sauvignon Special Reserve. We have had many vertical tastings in the past, but this one was driven by our friend’s access to the wines. You see the Herzog Winery Wine Club, sent him an email asking if he wants to taste a 4 bottle vertical of Napa Valley Cabernet! Our friend bought the vertical and shared it with us all, and it was a true treat. These folks are our friends, so it is always fun to enjoy a meal with them and their lovely family.

The meal started off (Kiddush) with a bottle of 2004 Herzog Napa Valley Special Reserve Cabernet Sauvignon. The wine was killer, the nose was awesome and the mouth was smooth with lovely rich flavors. This was followed by some lovely fish and a bunch of lovely dips. We all enjoyed a glass of the wine, and then the bottle was moved to the side, to follow it through the meal. This was a really good tactical approach to a vertical wine tasting. The correct approach to a vertical wine tasting is to taste a glass of each wine one after the other, and then loop back to the first wine and do another round, until the wine is done.

Just a bit of information. The 2004 vintage was not mevushal! What? Herzog not being mevushal? Yes, in 2003 and 2004 Herzog decided to mevushalize their wines BEFORE bottling and NOT, as they do now, which is after fermentation, well before bottling.

So we tasted the 2005 Herzog Napa Valley Special Reserve Cabernet Sauvignon next. Where the 2004 was a killer wine, the 2005 was a total let down, truly sad! The wine has a lovely nose, but the mouth and finish were not enjoyable at all. I will state that the wine was starting to turn brown, but it should not have affected the wine to this significance. We then moved to the main course, which was some killer barbecue chicken, salads, and mushrooms. The next wine was the 2006 Herzog Napa Valley Special Reserve Cabernet Sauvignon. This wine was rich with clear chocolate covered cherries and then lovely fruit. The final wine we enjoyed was the 2007 Herzog Napa Valley Special Reserve Cabernet Sauvignon. This was the other huge winner for the meal. When we returned to the 2004 – it was dead :-(. So clearly this is a wine you want to enjoy NOW, and do not hold and pray, this is a wine to be enjoyed now. The 2005 vintage did not improve with more air, it was equally unbalanced. The 2006 vintage was slightly improved and the 2007 vintage did improve with more air.

So, the real question is NOT which was the best, the real question is did the vertical show itself in a common manner, or did some show themselves in a unique manner? The answer, they are common, just look at the wine notes below. Black cherry did appear in the 2005 and 2006 wines, while the cedar, cassis, blackberry, vanilla, and tobacco were common throughout. The wines were all rich and mouth filling, with the 2005 being out of whack, which is what dragged it down, while the 2007 was far too closed from the start, but did open and show its joy after it had some time to open.

This vertical was really fun, but the 2005 and 2006 were let downs for us, to some extent. In the end, it was really cool to be able to taste these wines with some age on them. The other shock to me was that these wines were not made to last – shocking. One final shock, was that I was reading the latest Wine Spectator – over the holiday, and it was all about the 2007 and 2008 Napa wines. The had some 400+ wine scores and some 100+ wine notes or more. Of course, like always, I started looking for some kosher wines on the list. They had an alphabetical list of scores, and sure enough there was one and only one kosher wine – the 2007 Herzog Napa Valley Special Reserve Cabernet Sauvignon, the wine we really liked. Well, the Wine Spectator, drum roll…., gave it a whopping 82 (Sorry it is a PDF)! Are you kidding me! Maybe the 2005 can be given that score, but there is NO WAY that the 2007 is worthy of that gut shot! Like, I stated in the wine note below, either they had a bad bottle or the wine tatting went really wrong.

The wine notes follow below. Many thanks to my friends for being so very kind to invite us for this highly enjoyable vertical tasting:

2004 Baron Herzog Cabernet Sauvignon Special Reserve Kosher Napa Valley (USA, California, Napa Valley) – Score: B++ to A-
The nose on this purple to black colored wine is super rich with tobacco, chocolate, sweet cedar, smoky notes, over time a super extracted espresso coffee note appears, blackberry, cassis, rich plum, black pepper, dirt, and vanilla. The mouth on this medium to full bodied wine was super rich and velvety with soft integrated tannin, attack of blackberry, blackcurrant, rich ripe plum, and cassis. The mid palate is balanced with nice acid, integrated tannin, rich sweet cedar, tobacco, and mint. The finish is super long and spicy with lovely toasted espresso coffee, chocolate, tobacco, sweet cedar, mounds of vanilla, ripe plum, and blackberry. This wine lasted for one hour, after that it died a horrible death, the nose was gone, and all that was left was a heightened sensation of acid, as the supported flavors that played so well with the acid before, simply died off – DRINK UP and DO NOT decant or open early to air out. Also, this wine was non-mevushal. In 2004 Herzog released non-mevushal and mevushal versions of the same wine, the mevushal version was called M Series and was cooked before bottling, which adversely affected wines by having a cooked fruit flavor.

2005 Baron Herzog Cabernet Sauvignon Special Reserve Kosher Napa Valley (USA, California, Napa Valley) – Score: B
The nose on this black colored wine with a strong browning tint is its best feature. The wine starts off with chocolate covered cherries, tobacco, vanilla, raspberry, blackberry, plum, sweet cedar, blackcurrant, and dirt. The mouth on this medium bodied wine has lost its fruit and was showing its acid core without the supporting cast to help it, the integrated tannin adds a lovely mouth feel, the acid is unbalanced with hints of raspberry, blackcurrant and black cherry. The mid palate is unbalanced with sweet cedar and espresso coffee. The finish is spicy and long but unbalanced with sweet cedar, espresso coffee, and vanilla. This wine was unbalanced from the start in the mouth, the nose was lovely, quite a shame. This is a dead mevushal wine. 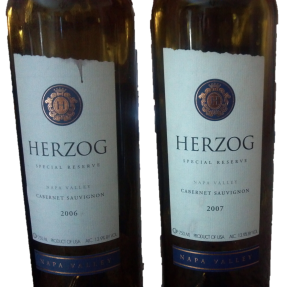 2006 Baron Herzog Cabernet Sauvignon Special Reserve Kosher Napa Valley (USA, California, Napa Valley) – Score: B++
The nose on this purple to black colored wine is screaming with chocolate covered cherry, sweet cedar, vanilla, espresso coffee, raspberry, tobacco, blackberry, and plum. The mouth on this medium to full bodied wine is rich with soft tannin, nice black cherry, raspberry, blackberry, and plum. The mid palate is balanced with nice sweet cedar, chocolate, toasted espresso coffee, and acid. The finish is long with espresso coffee, plum, raspberry, blackberry, black cherry, tobacco, and nice vanilla. This is a wine that still has legs but is probably close to its end. Drink up or within a year at the most. This was a mevushal bottle and a wine you can enjoy for a couple of years.

2007 Baron Herzog Cabernet Sauvignon Special Reserve Kosher Napa Valley (USA, California, Napa Valley) – Score: B++ to A-
The nose on this truly electric purple to black colored wine is exploding with youth, which in comparison to the other wines in the vertical, was clearly more youthful, with leafy tobacco, rich chocolate, cedar, vanilla, black cherry, blackberry, cassis, graphite, and plum. The mouth on this medium to full bodied wine is rich and semi-extracted, hopping with not yet integrated tannin, along with a rich concentration of blackberry, black cherry, plum, and cassis. The mouth is still plush and coating but as this ages, look for silky smoothness and rich cedar tannin combination in the mouth. The mid palate is balanced with youthful exuberance, acid, tobacco, cedar, and more nice tannin. The finish is long and spicy with a fresh fat stogie in the mouth, a large cedar box humidor in one hand, and a large basket of plum, cassis, blackberry, baker’s chocolate, and vanilla in the other hand. This is a mevushal wine that is going nowhere and can be enjoyed for a few more years to come. I was personally shocked to see wine spectator score this wine an 82 – but hey, it was either a very bad bottle, or something went horribly wrong during the tasting.