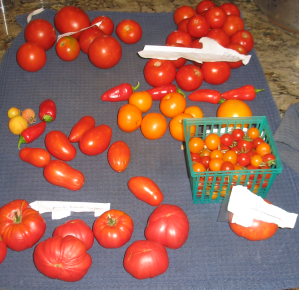 On the week of September 9th we went outside and picked fresh yellow, orange, red, and pink colored tomatoes for one of our favorite dishes – ratatouille. We have made this dish three times already this season, and each time we make it – we use fresh tomatoes, which have deep rich flavor along with sharp acid that really picks up this dish. We also picked our Italian and yellow crookneck zucchini, along with some WHITE and black eggplant. With these three ingredients along with purple onions we made an absolutely killer ratatouille that really showed how fresh vegetables and fruit (yes tomatoes are fruit) can make the saying true; “the whole is greater than the sum of its parts”. Even more, it showed how lovely a summer dish can show when put together the right way. We paired the ratatouille with quinoa, soy sausages, and fresh green salad

2005 Four Gates Cabernet Franc – (USA, California, Santa Cruz Mountains) – Score: B++ to A-
The nose on this garnet to purple colored wine is hot initially out of the bottle, after some time the wine opens to show tobacco, sweet oak, chocolate, plum, raspberry, garrigue, blackcurrant, black cherry, loamy dirt, and green pepper. The mouth on this medium to full bodied wine is rich and mouth coating with nicely integrating tannin, dirt, plum, raspberry, and garrigue. The mid palate is bracing with acid, chocolate, tobacco, and plum. The finish is long and spicy with tobacco, chocolate, sweet oak, plum, raspberry, and more garrigue. The finish lingers long with garrigue, chocolate, tobacco, and plum. This bottle is doing fine, and has at least two or more years ahead of it.