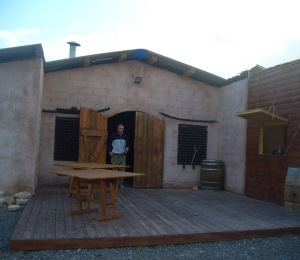 Tucked away into the winding roads that meander through the misty Judean Hills – we find our selves driving through a small Moshav (town) called Nes Harim, in search of the Katlav Winery.  Like so many of the small boutique wineries that are popping up all over these hills – this winery is equally challenging to find.  However, what  separates this winery from many of the other up and coming wineries is the owner and wine maker.  We call Yittach Yossi on the cell and he answers us almost immediately and we explain to him – the best we can of course – where we are, and he goes on to explain that we had actually just driven by his house!  We find a driveway and turn around.  After tracking down the house – which in hindsight (as this story unfolds) should have been VERY easy to notice – being dwarfed by a hulking Olive Tree.  He comes and greets us covered in paint and trailed by two adorable dogs – he asks us to drive the road behind his house and meet him at the winery.  As we drive the small dirt road behind his house – the winery comes into view – but so does the beautiful overlook he has on the valley below.  Nes Harim is no different than any of these Moshav(s) that line the Judean Hills – they are all compact in size and are built on hill sides that surrender to beautiful vistas and those pesky switch back roads – that we finished traversing a few moments ago.

To say Yittach is passionate about wine would be an understatement.  He truly loves his craft.  He started out as a highly successful architect and builder – building building all around Israel.  It was chance meeting with an ailing Persian worker’s mother that changed his world and turned him into the wine maker he is today.  One of his Persian workers had turned ill and he went to see him in the hospital.  It was there that he met the worker’s mother and she told him I need two things from you – marry off my son and grapes!  Yittach asked why do you need grapes?  She went on to explain that she had been making wine for years, before immigrating to Israel – because of the lack of kosher wine in Iran, and she missed her home made wine.  Yittach got right to work – he made the man his wife’s brother-in-law – by marrying him to his sister-in-law.  Then he got to sourcing grapes, which 12 years ago was not as easy as it is today – unless you were looking for eating grapes.  After a bit of work he found the grapes and went on to learn the Persian process of wine making.  He took those techniques and improved on them (many times to detriment of the wine and Yittach) until 2000 when he released his first production of 1500 bottles.  Today his bottle production fluctuates based upon the grape quality and vine production – but averages 10 thousand bottles.  His vines are mostly dry farmed – which tend to produce fewer fruit from the vines, but ones with more tartness and more intense fruit flavors.  They are planted in the hills that surround Moshav Nes Harim and on the very same terraces that the settlers planted vines (until they went into disrepair).  The close proximity allows for better control of the vines, picking time, and sugar content – all the benefits of a Estate Bottled Winery.

We were led into his winery (which he built by hand) and we sat down at the table and talked for quite a long time.  Yittach is equally comfortable talking about wine as he is on a sundry of topics ranging from politics to spirituality.  We tasted two bottles of wine (notes below).  His warmth and comfort with his own skin seemed to draw us in to topics that we would not usually get into during a wine tasting.  It was a real joy and one that showed us the other sides of the wine business here in Israel.  Yittach then went on to show us the barrel rooms and his bottle cellar.  The  bottles are graced with a picture of the huge and ancient olive tree that graces Yittach’s front yard – the one we passed when driving by his house.

We would like to thank Yittach for his hospitality, passion and time when visiting his winery.  Following are the tasting notes which we sampled at the winery.

2005 Wadi Katlav – Score: B+
This red to black colored wine seems to shimmer in the glass.  The nose has strong aromas of blackberry, dark plums and some hints of green vegetation.  The wine is accessible yet complex and smooth with carry over from the nose of blackberry, currants, and vegetation.  The finish is long and satisfying with a mouth coating that lingers on the palate.

2005 Katlav Syrah – Score: A
This purple to black colored wine needs a fair amount of time to open.  At the start the nose has anis, dates and hints of pepper.  The wine opens in the mouth to reveal leather, tar and and almost inky flavor that lasts long on the mouth and ends with very nice spicy notes.